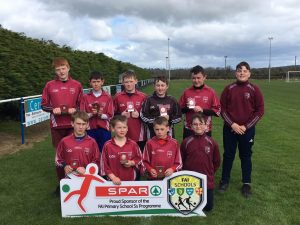 Our school was entered into an Under 13s 5-A-Side Soccer Qualifier Tournament in Thomastown.  All the boys from 4th, 5th and 6th class were taking part in this tournament.  Days before going to the tournament, Mr O’Halloran split us into two teams.  The 5th and 6th class boys made up one team, and had 2 subs.  4th class boys made up a second team and they had 3 subs on their team.

A bus was hired to take everyone there.  When we got there, we changed into our soccer jerseys and football boots on the bus.  We also had a light and healthy snack to give us energy for the match. We then went down to the pitch, where we warmed up by passing the ball to each other while running around, before getting a pep talk from Mr O’Halloran.

Each of the two teams were made up of a goalie, two backs and two forwards.  Our 5th and 6th class players did our school proud by competing really hard against the other schools.  We played 4 matches, of which we won 3 and drew in the last match. 4th class pushed through each of their matches and tied at the top of their group.  Unfortunately the results came down to goal difference and they lost out, coming home in 2nd place in their group. We qualified for the Kilkenny Finals which took place a week later.

We had a lot of fun and enjoyed playing in the matches as well as supporting our other team members.  It was a great day and a great achievement for all of us.  Thanks Mr O’Halloran for getting us there!