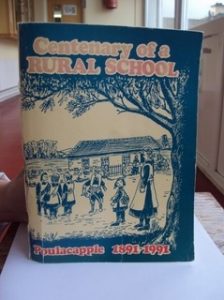 Poulacapple N.S. is a catholic school in the Diocese of Cashel/Emly and under patronage of Archbishop Kieran O’Reilly.
Education in Poulacapple can be traced back to the hedge schools of Poulacapple and Garryricken. The first recognised school being the Ormonde pay-school of 1850. Built by the Ormond/Butler family for local children, its first teacher was the Gaelic scholar and folklorist John Dunne. (This house is now owned by the O’Brien Family and is next to the new modern Poulacapple School, built in 1966. It is situated in the parish of Mullinahone – home of Charles J Kickham – near the Kilkenny Border.

The school over looked by Sliabh na mBan and just a stone throw from the 7th century monastic site of Killamery with its 9th Century High Cross. Steeped in history and folklore its pupils and teachers are very conscious of this Irish tradition. The school celebrated its Centenary in 1991 and published a book “Centenary of a Rural School” to record events for posterity. (Compiled largely by Nora Larkin – Principal (1975-2001), in consultation with past and present pupils and teachers of Poulacapple N.S. It includes many colourful memories of school life down through the years. It is a social document dealing with the lives of Poulacapple people both young and old. Famous local landmarks and important historical events are highlighted. A copy of the book can be viewed on request at the school.